It’s now been a good 12/18 months since annual rental price inflation in Hitchin peaked at 3.3%. Since then we have seen increasingly more humble rent increases. In fact, in certain parts of the Hitchin rental market over the autumn, the rental market saw some slight falls in rents. So, could this be the earliest indication that the trend of high rent increases seen over the last few years, may now be starting to buck that trend?

Well, possibly in the short term, but in the coming few years, it is my opinion Hitchin rents will regain their upward trend and continue to increase as demand for Hitchin rental property will outstrip supply, and this is why.

The only counterbalance to that improved rental growth would be to meaningfully increase rental stock (i.e. the number of rental properties in Hitchin). However, because of the Government’s new taxes on landlords being introduced between 2017 and 2021, that means buy-to-let has (and will) be less attractive in the short term for certain types of landlords (meaning less new properties will be bought to let out).

Interestingly, countless market experts assumed at the start of 2017, that the number of rental properties would in fact drop throughout the year. The assumption being as the new tax rules for landlords started to kick in, landlords looked to kick their tenants out, sell up and invest their capital elsewhere. (Although ironically that would lower supply of rental properties, decreasing the supply, meaning rents would increase again!).

Anecdotal evidence suggests, confirmed by my discussions with fellow property, accountancy and banking professionals in Hitchin, that Hitchin landlords are (instead of selling up on masse), actually either (1) re-mortgaging their Hitchin buy-to-let properties instead or (2) converting their rental portfolios into limited companies to side step the new taxation rules.

The sentiment of many Hitchin landlords is that property has always weathered the many stock market crashes and runs in the last 50 years. There is something inheritably understandable about bricks and mortar – compared to the voodoo magic of the stock market and other exotic investment vehicles like debentures and crypto-currency (e.g. BitCoin).

Remarkably, there is some good news for tenants, as Tory’s recently published the draft Tenants’ Fee Bill, which is designed to prohibit the charging of tenants lettings fees on set up of the tenancy. However, looking at evidence in Scotland, I expect rents to rise to compensate landlords, thus hammering faithful tenants looking for long-term tenancy agreements the hardest. This growth will be on top of any usual organic rent growth. It really is swings and roundabouts!

So, what does this all mean for landlords and tenants in Hitchin? In my considered opinion, rents in Hitchin over the next 5 years will rise by 8.9%, taking the average rent for a Hitchin property from £986 per month to £1,074 per month.

To put all that into perspective though, rents in Hitchin over the last 12 years have risen by 20.7%. In fact, that rise won’t be a straight-line growth either, because I have to take into account the national and local Hitchin economy, demand and supply of rental property, interest rates, Brexit and other external factors. 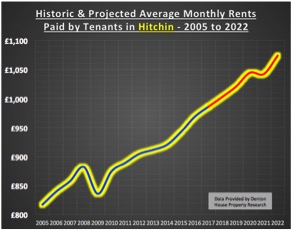 In the past, making money from Hitchin buy-to-let property was as easy as falling off a log. But with these new tax rules, new rental regulations and the overall changing dynamics of the Hitchin property market, as a Hitchin landlord, you are going to need work smarter and have every piece of information, advice and opinion to hand on the Hitchin, Regional and National property market’s, to enable you to continue to make money.